July 08, 2017
With all that I read, hear, and see these days about folks (not excluding yours truly) expressing themselves, I sometimes wonder about President Lincoln's idea of writing but not sending letters .  For better or worse, there is certainly a sharp contrast between that and typical use of today's communication. I was not necessarily thinking of opinions, emotions, and perspectives although I do see the wisdom in the Lincoln's method of dealing with such issues. My issue, at least this time, was being stuck with a particular problem using a technology which is not part of my regularly used skillset.  The technology itself is irrelevant to my point so I won't name it here. I had struggled with a solution after a bit of reading the documentation, searching for and modifying some similar examples, and experimentation.  The time I had put in was actually very little because I was simultaneously working on other parts of the solution.  That's another way of saying I wa
Post a Comment
Read more 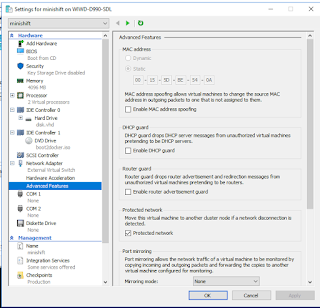 Although I would not consider myself as a heavy user of Windows, I believe I need to try to meet the challenge of supporting those running Linux, MacOS, and Windows. I recently ran into an issue running Minishift on Windows 10 and Hyper-V.  I suspect regular users of both of these technologies might already be aware of what tripped me up but I thought I would document it here just in case someone needs it.  In case you're not aware of it, Minishift is a very nice project that allows a developer to easily run OpenShift , also known as OCP or OpenShift Container Platform, on a desktop computer. Overall, I had a nice experience installing Minishift on a Windows 10 computer running HyperV but once I stopped and restarted Minishift, and had a new ip address address assigned to the VM, the instance would no longer start.   Now if you're doing any Docker development on your computer and you move around a good bit or perhaps you're on and off a VPN, you probably know that v
Post a Comment
Read more

May 15, 2017
I have heard Scott Hanselman say  it's more efficient to blog about topics instead of emailing or otherwise writing in a way which cannot be search easily.  Looking back through my blog, I have done this some over the years but not nearly enough.  I should also admit I have googled for issues for which I could not recall a solution and found my own writings. ...now for the topic at hand: I have fumbled through this particular operation despite the fact that it's document here .  I have installed OpenShift 3.x a number of times now.  Given that this involved configuring and testing various combinations of features I have the need to delete users now and again.  When deleting and OpenShift user, it's import to delete the user along with the identity, at least as of this writing. oc delete user myuser oc delete identity htpasswd_auth:demo Also, recall you can get users and identities with the appropriate "oc get" commands. oc get user oc get ident
Post a Comment
Read more

August 27, 2016
Technically speaking, this issue has been resolved but I am not sure I or the support folks fully understand what went wrong.  Ultimately, as I understand it, the number of free applications on my account was increased and I was then able to transition a project from the original Firebase platform to the new one. Billing has been and is still enabled on my account so I don't know why the increase of free projects was necessary but it worked. The tech support person was polite, persistent and ultimately successful. Now I am trying to recall which of the new features was the original impetus for wanting the upgrade. ;) Happy coding, Carl
Post a Comment
Read more

July 20, 2016
While the issue described in the last post is not yet resolved, I have had some very nice email exchanges as well as a conversation via Google Hangouts with a Firebase tech support person.  Apparently despite the fact that I am registered as paying for some Google services, I am bumping into something related to the free limit and tech support needs to work that out with the billing folks. In the meantime, I will make certain an app or two has billing activated and see what happens.  As I told the tech support person, I believe Firebase is good technology but I am caught in a crack between the legacy and current releases. I do hope this issue is not existent or made easier for others. Happy coding (and getting access to technology), Carl
Post a Comment
Read more 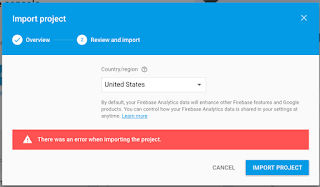 I started with Firebase before Google bought the company.  It's definitely a cool technology but as it sometimes happens support is not always great from big companies. In trying to move an app from the "legacy platform" to the as-of-Google-IO-2016 new platform.  This process seems like it would be simple enough because they built a nice UI which ultimately takes you to an import option. When I click on the Import button for any of my apps, I get the message I have captured below. I have had several tech support email exchanges for the past month or so.  They are always polite, sometimes apologizing for my trouble but not necessarily quickly (day, two, or more between emails). The bottom lines is 1) it's not fixed...yet and 2) I don't think one can rely on such and call it support. I have a credit card on file with my Google account (I continue to experiment with various Google services) but I have been told this may have something to do with me relyi
Post a Comment
Read more

December 27, 2015
A quick reminder to myself (and anyone else who may miss this) about setting up a Docker repository in JFrog's Artifactory online service.  As of now, this page , has a "Click to expand" link under the "Working with Artifactory Online" section. The text there explains that there's a special pattern to be followed for naming the repository.  It's this information that I was missing in order to get a repository up and available for use. Here is an excerpt from those instructions: First, you need to create a new Docker V2 repository by the name  dockerv2-{local/remote/virtual}.  HTH, Carl
Post a Comment
Read more
More posts